The story of KAB Ecology begins in 2009 when founder Kerem Ali Boyla was invited to work as a biodiversity consultant for Gökçedağ WEPP which at the time was financed by IFC. This study was the first systematic bird count performed for an environmental impact assesment in Turkey. The report was published on IFC portal and gained traction. KAB Ecology team began growing with the inclusion of expert birdwatchers and started taking on an array of projects such as highways, airports, wind farms and pipelines.

KAB Ecology began offering services in acoustic bat studies in 2015 and flora studies in 2016. In 2019, Boyla officially started KAB Ecology as a sole proprietorship based in Şişli, İstanbul. The company started offering services abroad in 2020 after it completed projects in Cuba and Afghanistan. In 2021, the company became incorporated in partnership with Esra Demirhan. 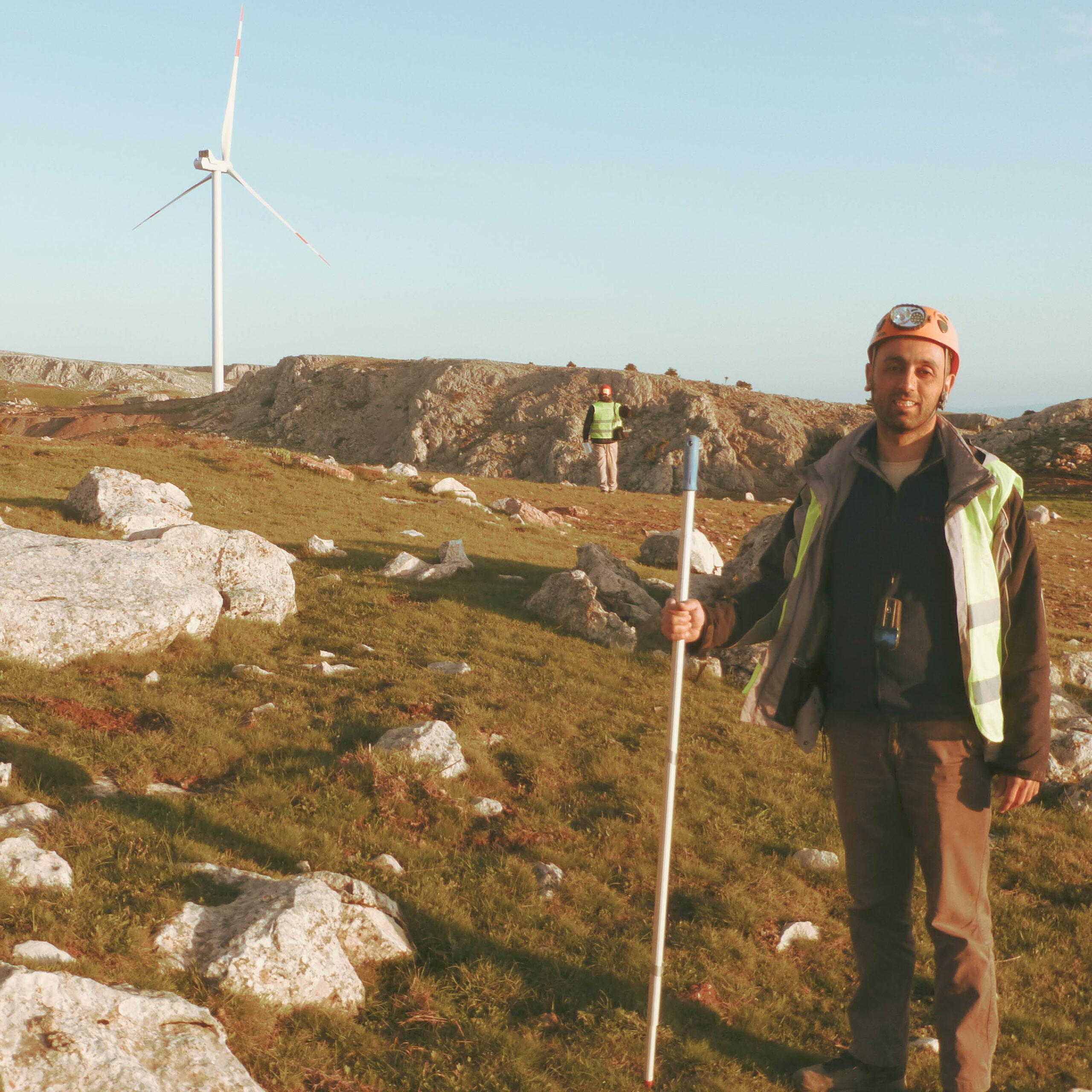 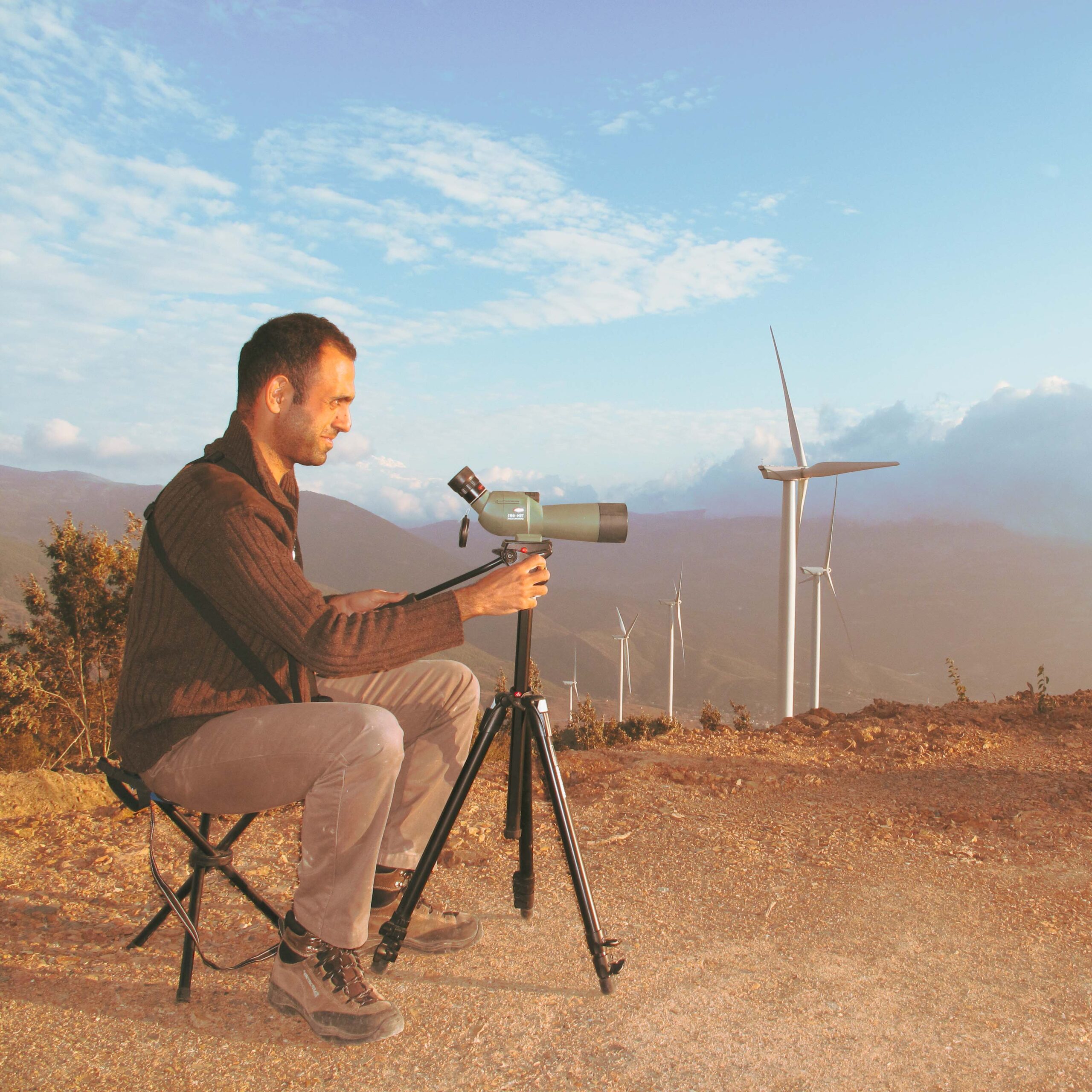 To conduct research and provide nature positive solutions based on the highest environmental standards developed by international financial institutions in order to ensure sustainability and net zero impact on biodiversity for investestments in infrastructure.

To promote the expansion of the sector and the development of new professionals in biodiversity consultancy in Turkey.

To become a major player in helping infrastructure imvestments become part of a sustainable future by enriching natural life and biodiversity.

To advance the current national legislation by submitting assessments that set a precedent. 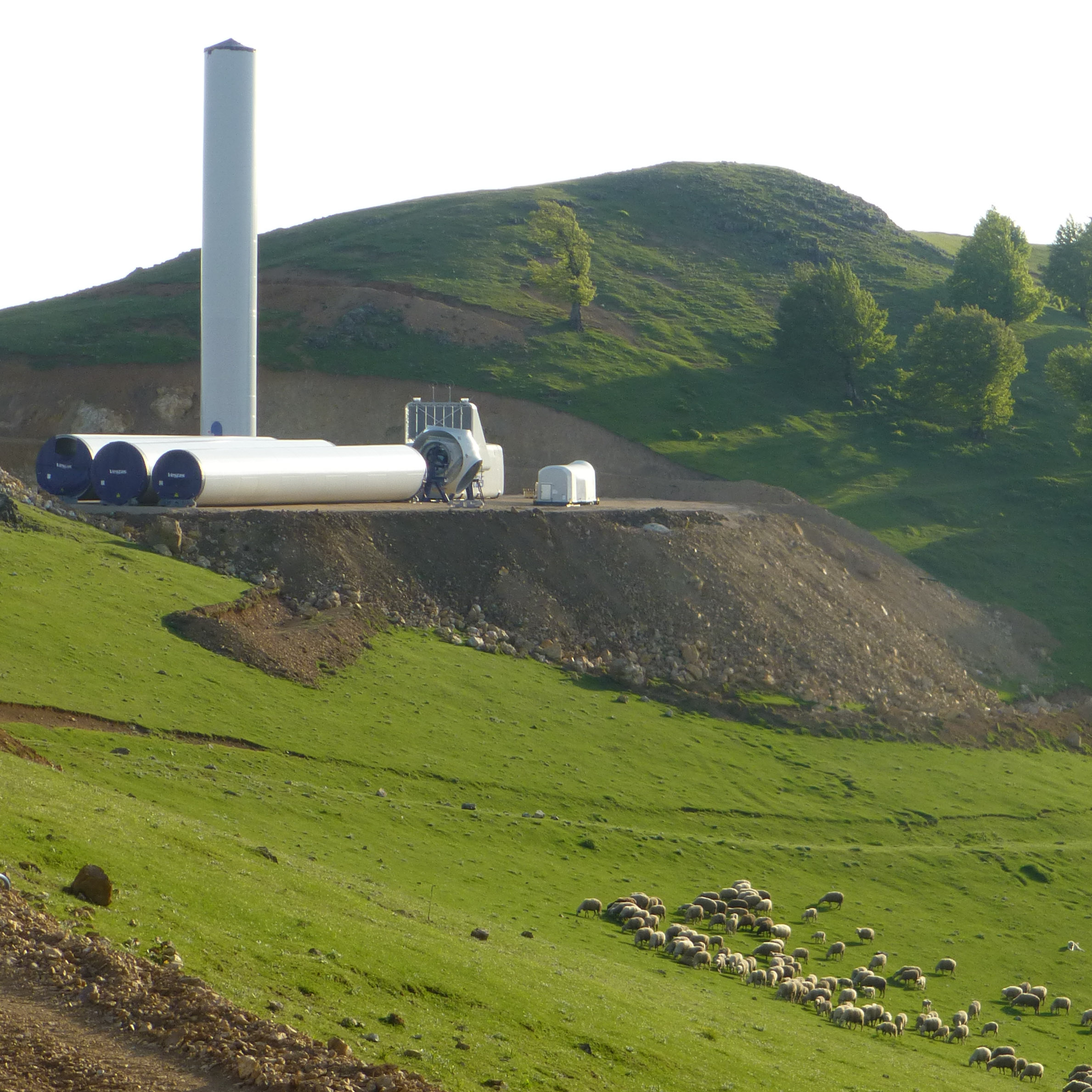 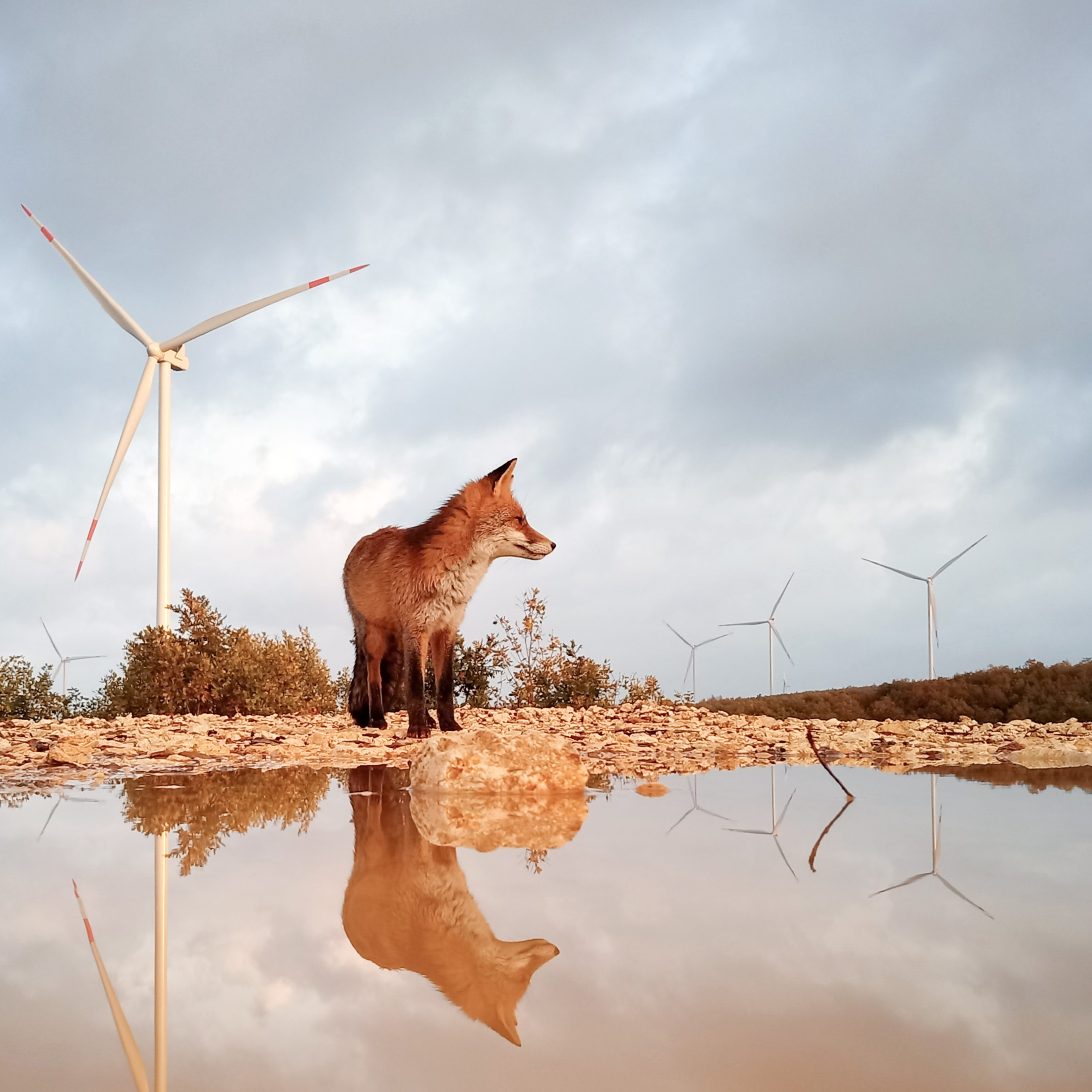 To be possess superior knowledge in our sector and our fields of expertise.

To understand the unique needs of each and every single project and implement a wholistic approach for those needs. To effectively and clearly communicate our assessments to stakeholders from any background and field.

To operate with utmost compatibility with national and international institutions.

To adhere to the current scientific methods and guidelines in conducting our surveys and utilize the most reliable data sets in our analyses. 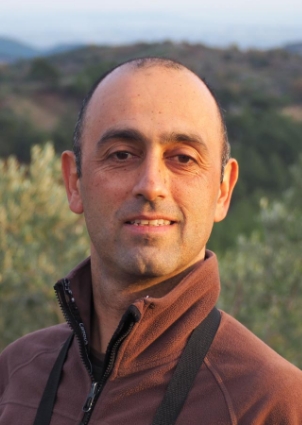 He started birdwatching at a very young age. He completed his undergraduate degree in Biology at METU (Turkey) and his master’s degree in Ecology from the University of East Anglia (England). He conducted nature conservation projects for the America Office of BirdLife International for four years. He contributed to the popularization of bird watching in Turkey with his publications, database management, and amateur and scientific research. He has been a biodiversity consultant since 2009 and is the founder of KAB Ecology. 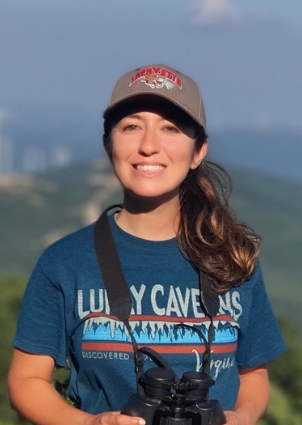 She started birdwatching in her high school years volunteering at a Aras bird banding station. She completed her undergraduate degree in Biology at Lafayette University (USA) where she worked as an undergraduate research assistant and prepared an interdisciplinary thesis on freshwater restoration ecology and conservation. She is an active member of eBird Turkey team as a translator and language editor. She joined the KAB Ecology team in 2020 and is in charge of planning, executing and reporting of research and monitoring projects. 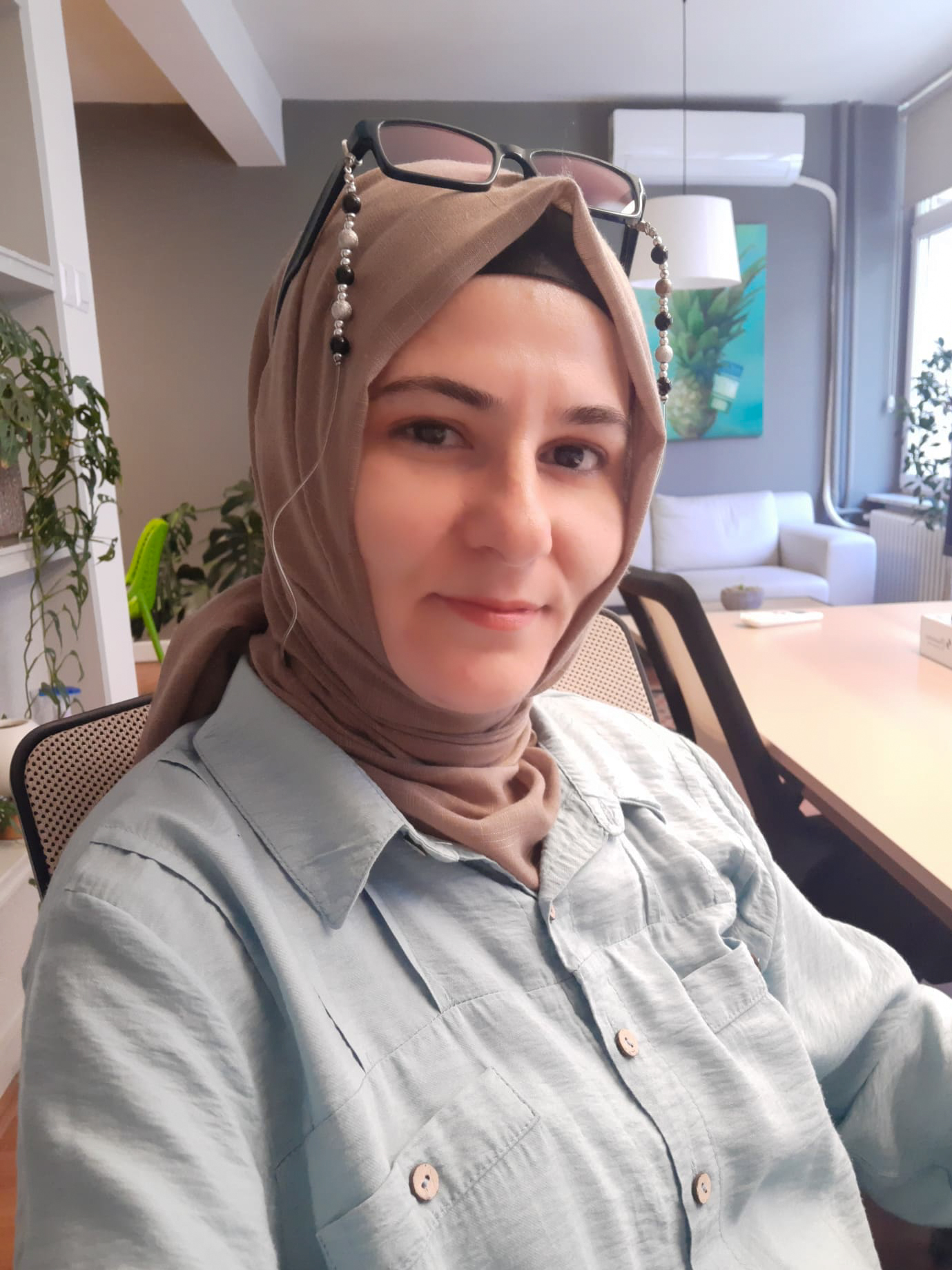 She started her career in a small accounting office. Later, she worked in various positions for 12 years in the finance department of a holding company active in the areas of household appliances, automotive, construction and others. She joined the KAB Ecology team in 2021. She is in charge of managing the accounting and financial affairs of the company. 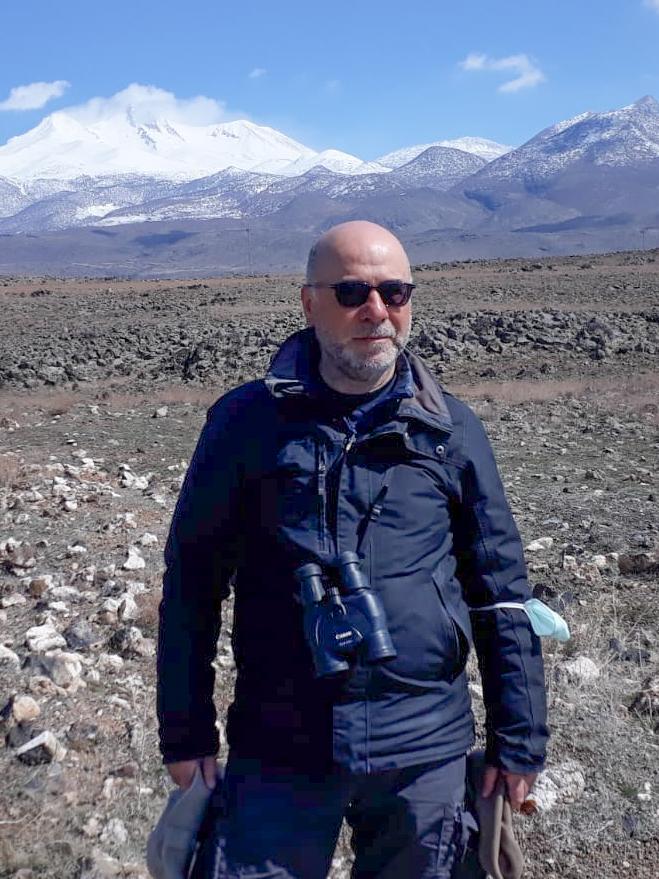 He started birdwatching at a young age in the forests of Yalova. He became one of the founders of the Istanbul Bird Watching Society in 2000 and mentored countless beginner bird watchers. He took part in bird research and nature conservation projects all across Turkey. He is an author of the TRAKUS Birds of Turkey book and also a regional reviewer for eBird online bird database. He has been working as a bird and botanical surveyor at infrastracture projects since 2009. 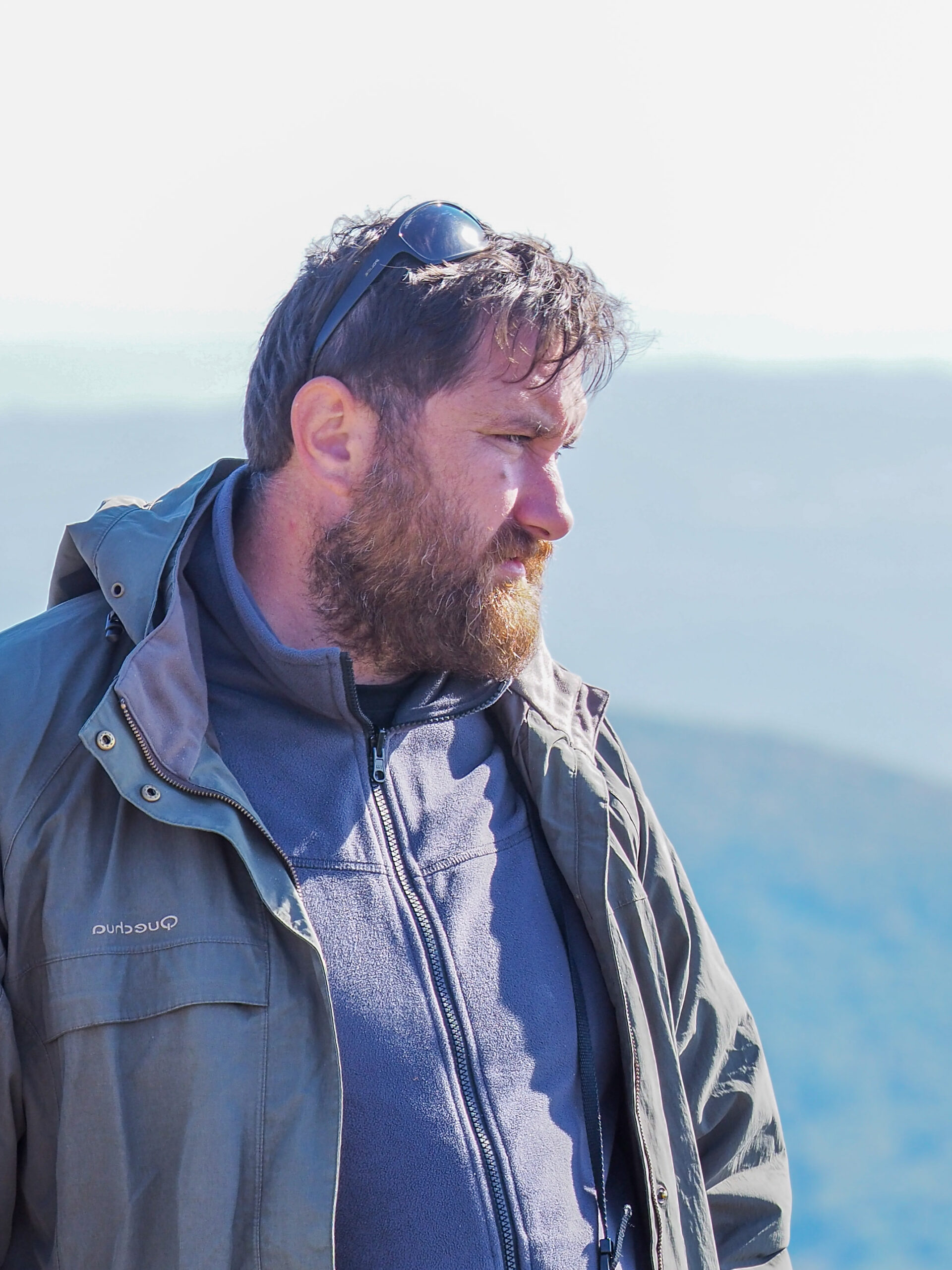 He started birdwatching in Samsun Kızılırmak Delta. He has a ringing permit and has been in charge of the Kizilirmak Delta Bird Ringing Station for 20 years. He has conducted and published many nature conservation and research projects in ornithology. He is among the authors of the book TRAKUS Birds of Turkey and also a regional reviewer for eBird online bird database. He has been working as a bird surveyor at infrastracture projects since 2014. 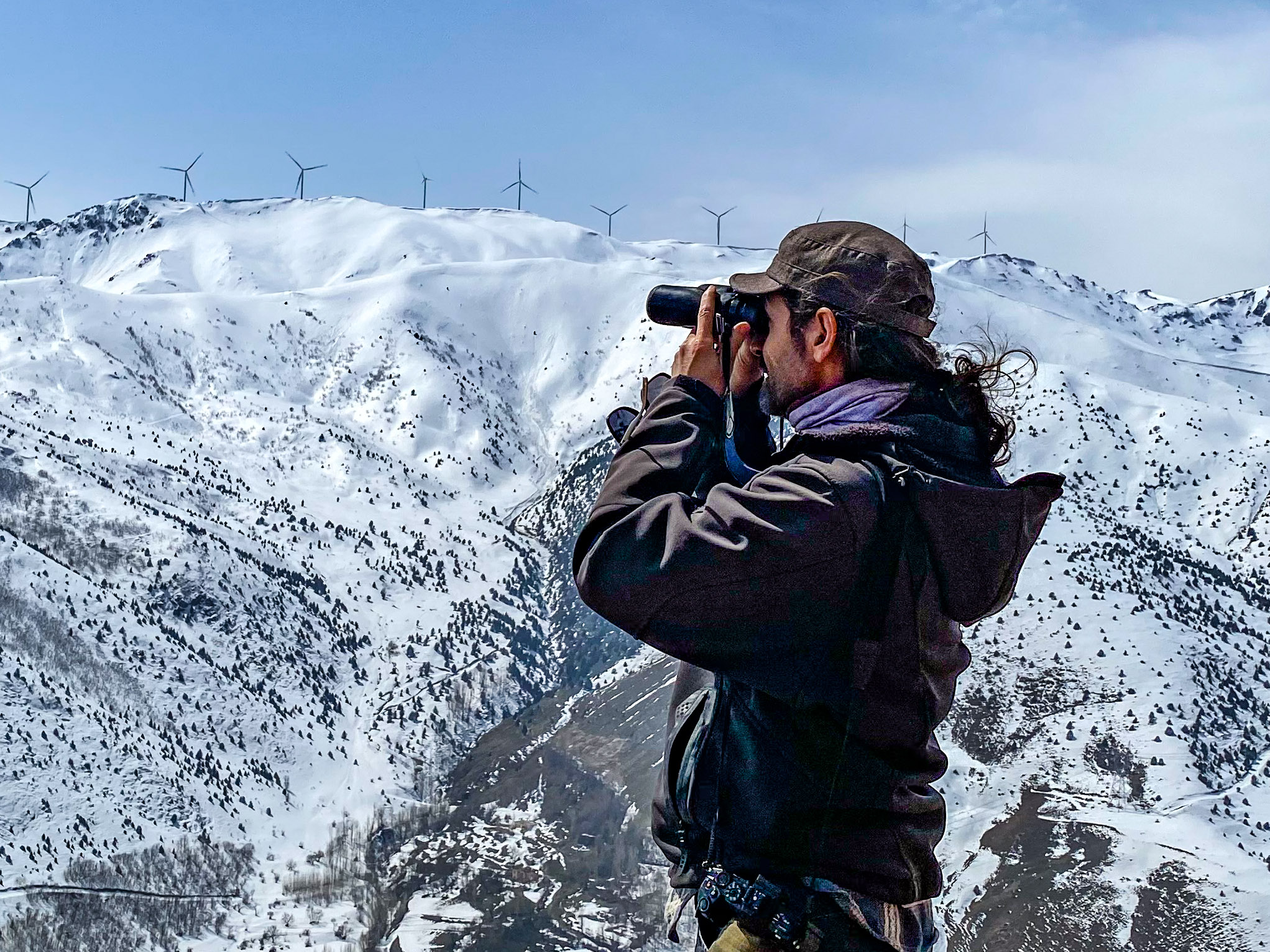 He started birdwatching in 2007, he is a nature enthuisiast in Ayvalık region, Western Turkey. He took part in bird research and nature conservation projects in many regions of Turkey. He organised the Mid-Bird Waterfowl Counts in the Aegean region. In addition, he is interested in nature walks and photography. He has been involved in bird and biodiversity surveys in infrastructure projects since 2014.

He started birdwatching in 2001. He participated in various nature conservation and biodiversity surveys in all regions of Turkey. He was part of the team that discovered the Mediterranean population of the Brown Fish Owl (Ketupa zeylonensis) in 2008. He is also a butterfly expert and manages the Instagram account @kelebekdoktoru. He conducts bird surveys, mortality studies and acoustic bat studies with the KAB Ecology team. 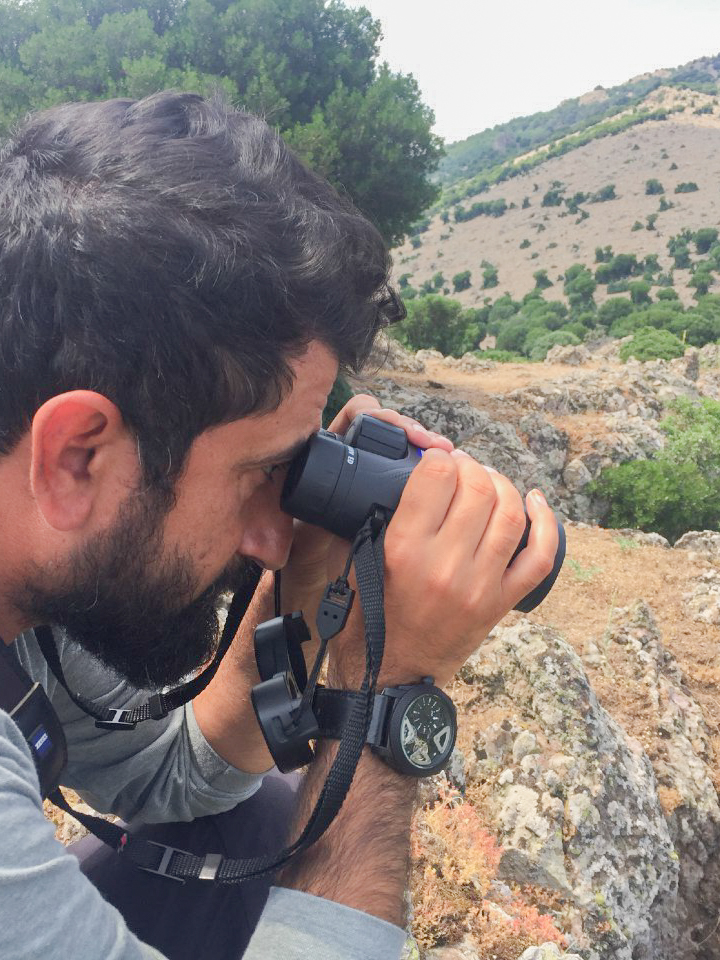 He worked at Aras and Kuyucuk Bird Ringing Stations as a ringer for 6 years. He completed his masters degree in biology with his thesis titled “Orientation Tendencies of Some Passerine Species Migrating through the Aras Valley”. He was part of the survey team monitoring soaring migratory birds at the Istanbul Airport for 4 years. Currently he is a PhD student at the Department of Landscape Architecture of Düzce University. He has been working as a bird surveyor at infrastracture projects since 2019. 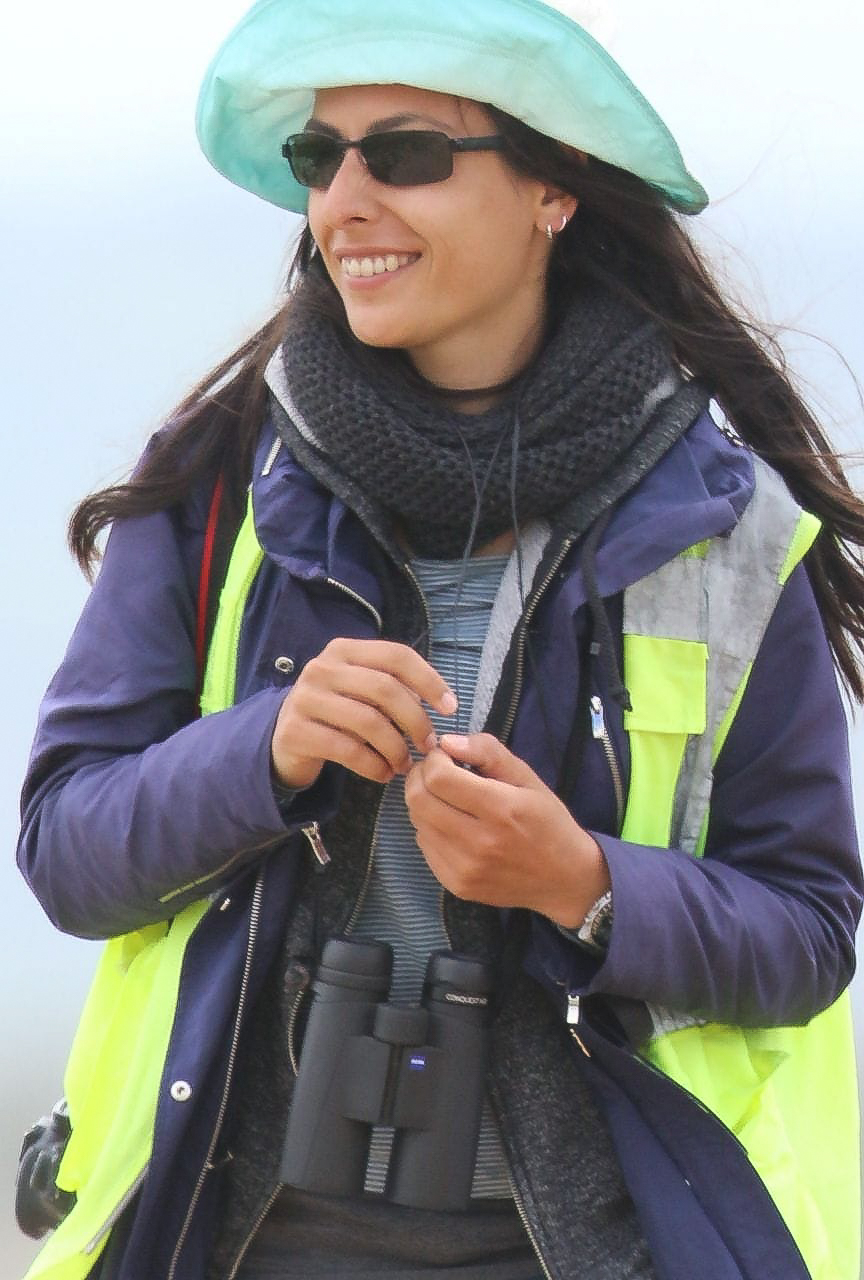 She started birdwatching as an undergraduate majoring in biology and she completed her thesis on the birds of Çardak Lagoon in Çanakkale. She was a member of the scientific team researching Yelkouan Shearwater (Puffinus yelkouan) in the Bosphorus and Dardanelles for 4 years. She was part of the survey team monitoring soaring migratory birds at the Istanbul Airport for 4 years. Currently she is a PhD student at the Department of Landscape Architecture of Düzce University. She has been working as a bird surveyor at infrastracture projects since 2019. 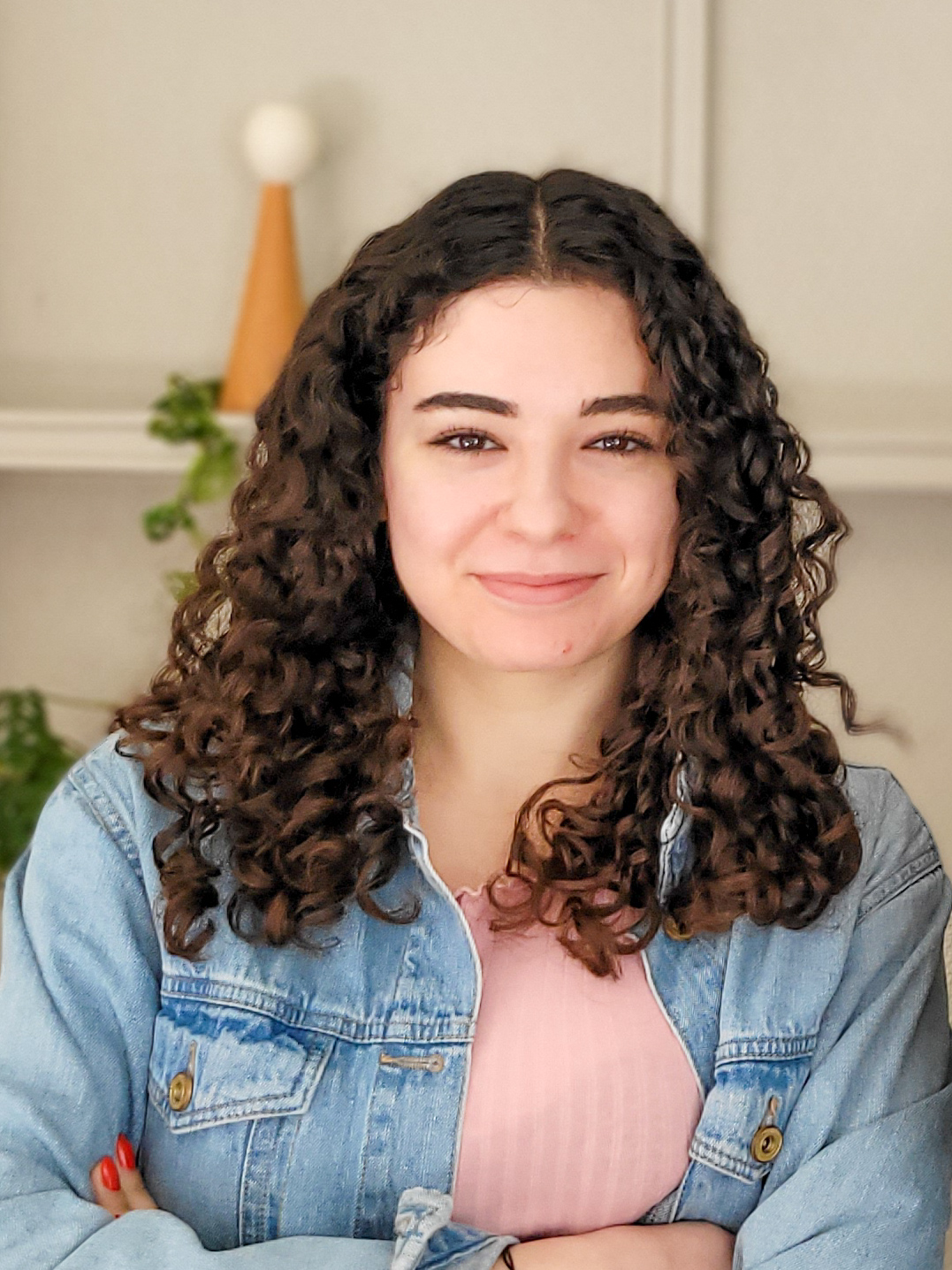 She completed her master’s degree in evolution and ecology at the University of Bordeaux (France). Currently, she is a PhD student at Bilgin lab within the Institute of Environmental Sciences of Boğaziçi University. She joined KAB Ecology team as an intern in 2020. She is responsible for sound analysis in acoustic bat studies. She also conducts DNA analysis and identification for mortality studies. 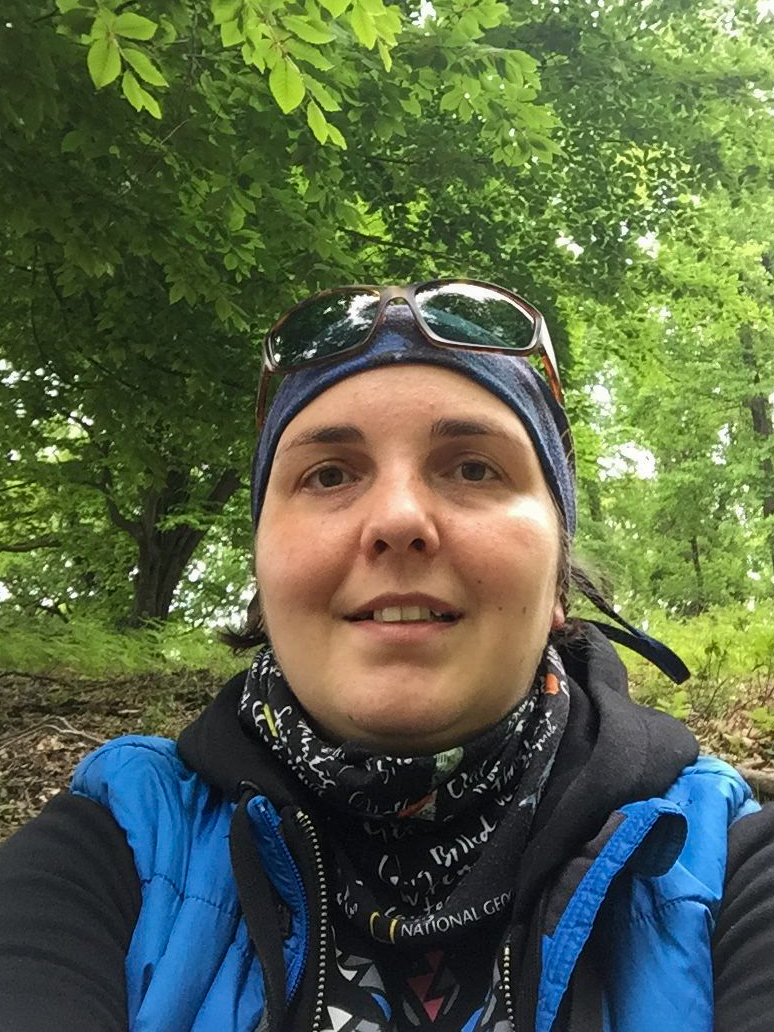 She completed her undergraduate degreee in biology at Ondokuz Mayıs University (Turkey). She volunteered at the Kizilirmak Delta Bird Ringing Station for many years. Currently, she studies the nesting preferences of woodpeckers in Belgrad Forest as a graduate researcher at the Faculty of Forestry of Istanbul University. She is also interested in ecological and ornithological monitoring with wildlife audio recorders. She assists KAB Ecology team with data entry, digitization and report revision since 2021. 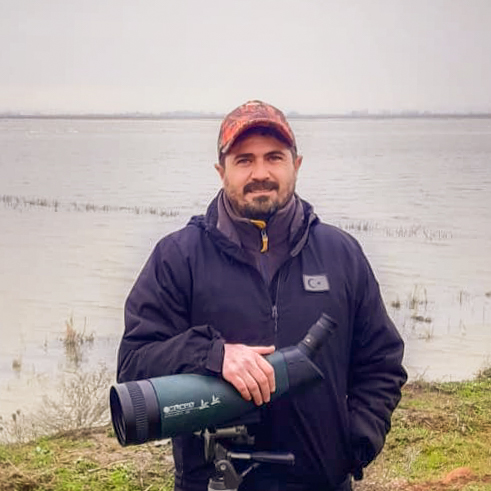 He spent most of his academic and professional life Edirne, European Turkey. He started birdwatching in 2005 and was actively involved in the development of TRAKUS online bird watching platform as the news editor. He has been studying the breeding biology of Eastern Imperial Eagle (Aquila heliaca) in Thrace region for almost 20 years. He is an author of the book TRAKUS Birds of Turkey. He was a KAB Ecology bird surveyor between 2019-2022. He is currently the director of Edirne Natural History Museum. 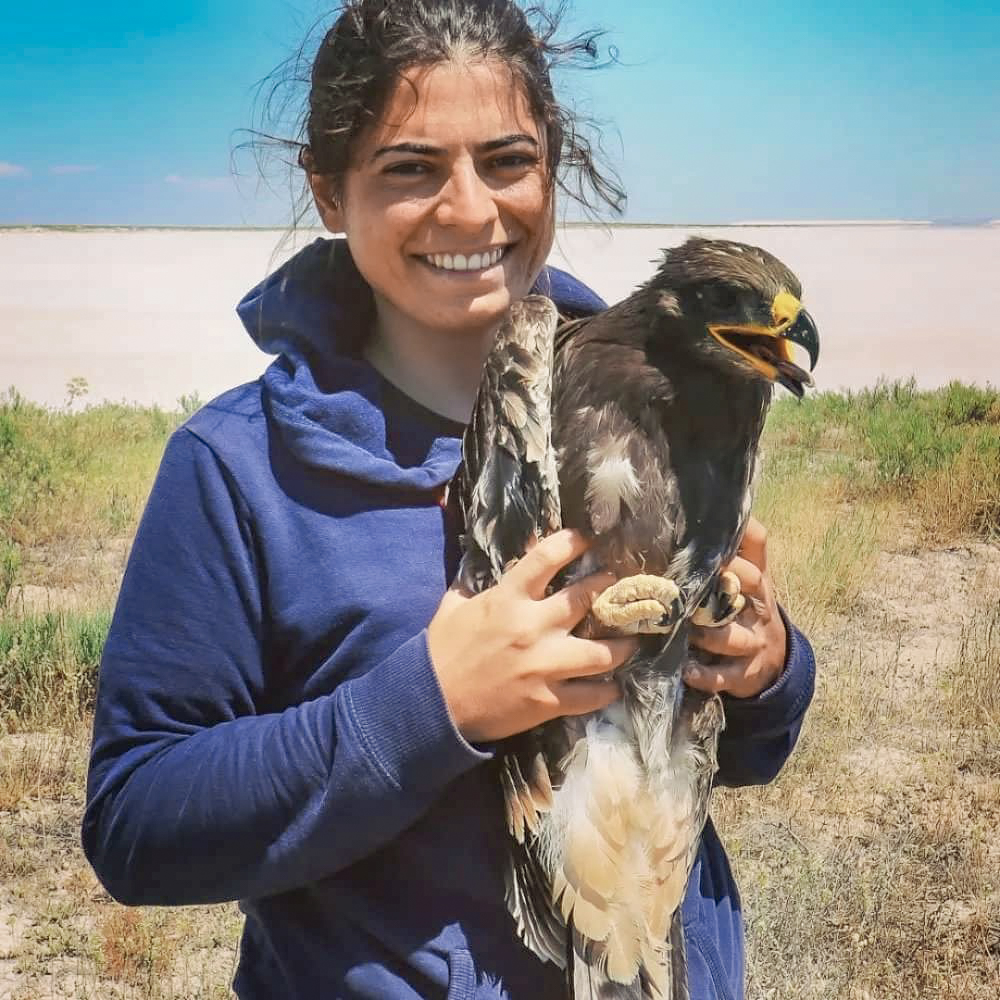 She majored biology at Hacettepe University (Turkey) and started birdwatching in 2012. For her master’s degree, she studied the reproductive success, habitat preference and diet of Eastern Imperial Eagle (Aquila heliaca) in Bolu, Northwestern Turkey. In 2015, she began her long term research on the Eastern Imperial and Steppe Eagle (Aquila nipalensis) in Turkey in collaboration with international experts. She participated in the bird surveys for KAB Ecology since 2019.